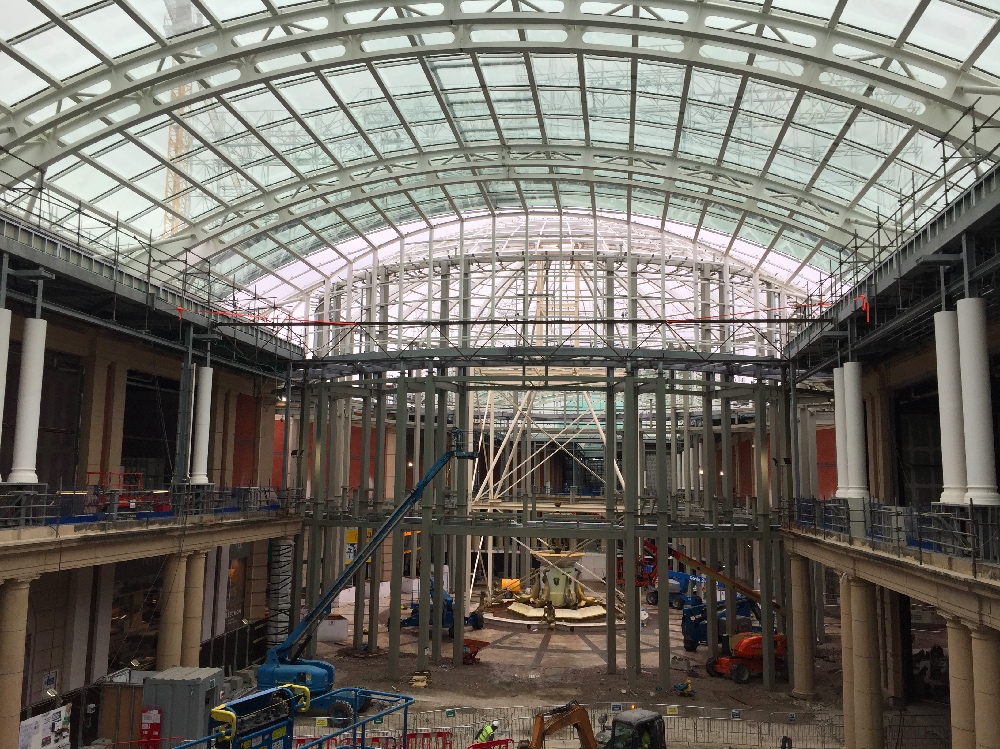 The roof itself is an impressive work of Architectural and Engineering design. The whole roof structure, including the dome, is made up of 1,354 pieces of steel. On top of this, there are 3,656 individual pieces of steel in the courtyard structures, and a total of 7,316 pieces in the whole project, weighing around 1,350 tonnes. The designers wanted the roof to replicate the current Trafford Centre, to give a very light, open sensation. The steel installation had the added challenge on the project of working in a live environment. The decision was made to make the site a 24/7 environment – with night shifts from 10pm to 8am – to ensure as little disruption to Barton Square’s retail tenants and shoppers as possible. But it is not just people that needed to be considered. With Merlin-owned Sea Life one of Barton Square’s tenants, the Contractor has had to factor in the welfare of several thousand sea creatures. The marine life is very sensitive to noise and vibrations, meaning the contractor has had to carry out a host of tests to ensure the creatures do not suffer.

Some of the more vulnerable species include Stingrays, Sharks, Japanese spider crabs and Octopus. Using the former BHS site, which sits diagonally opposite to Sea Life, the Contractor set up a simulation of the creatures’ tank locations. Sensors were installed as sample activities were carried out, such as drilling into steel structures and breaking open concrete floors. The noise and vibration levels have been carefully managed. Nevertheless, 24/7 monitoring of the sea creatures is being maintained with secretions collected by marine experts to monitor for signs of stress. As equally impressive as the glass roof is the granite and marble floor set to a detailed patterner and has now commenced on site. This flooring features a central starburst design around the fountain located in the central dome. The stones have been quarried from countries across the world, including Brazil, India, the US and Italy. They are then being fabricated by a Chinese firm in Xiamen before being shipped to Felixstowe for collection. Works are anticipated to complete in March next year.

Want to join the discussion?
Feel free to contribute!